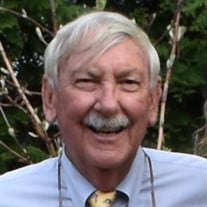 Dexter P. Nerney, 74 of Oak Bluffs, MA died on Saturday, September 11th of natural causes on the Elizabeth Island of Nashawena. His loving wife Marilyn of 52 years was by his side. Dexter was born on February 25th, 1947 in Attleboro, MA. He was the son of the late William and Ruth Nerney. He is survived by his wife and high school sweetheart Marilyn Gilson Nerney also of Oak Bluffs, MA; son Matthew Nerney and daughter-in-law Laura Fogarty of Needham, MA; daughter Katherine Mahony and son-in-law Colin Mahony of Lexington, MA; four grandchildren: William and Jack Nerney; Ella and Charlotte Mahony; and brother Nicholas Nerney of Oak Bluffs, MA. Dexter graduated from Attleboro High School in 1965, where he played soccer and was captain of the swim team. He graduated from New England College in Henniker, NH in 1969. Dexter also served in the U.S. Army Reserves. Dexter along with his brother Nick, ran the Knobby Krafters ad-specialty family business in Attleboro, MA for the majority of his career until his retirement in 2020. Born and raised in Attleboro, Dexter was very active in the community. He was a member of the Second Congregational Church in Attleboro, a board member of the North Purchase Crematory, board member of the Attleboro Chapter of Big Brothers Big Sisters, a member of the United Way of Greater Attleboro, and a member of the Attleboro Tri-Boro Community Lions Club. Dexter was also incredibly active with the Martha's Vineyard community, including the East Chop Beach Club, East Chop Yacht Club, East Chop Tennis Club, East Chop Association, and Martha's Vineyard Museum. Dexter was also a proud member of the Pilgrim John Howland society and the Pioneering Parmenters. Dexter had a passion for boating, fishing, clamming and working with his hands. He was especially creative with his artwork and crafts, which usually combined jewelry and striped bass fish skins. His entrepreneurial side would also shine brightly with each of his pieces, but his sales were much more about the personal connections and relationships. Dexter was soft spoken with a great sense of humor. He was always eager to listen and help and never judgmental. If there was a fish within 25 nautical miles he could sense it and locate it, not with sonar, but by watching the birds and by scent. He taught so many people how to fish and love the ocean especially around Martha's Vineyard. He was always eager to take out family and friends. It was never just about fishing, but the experience and especially making people happy. He had a gift when it came to making everyone comfortable. Whether it was him making and serving his incredible breakfasts and other meals, fishing, or anything else. Dexter was always willing to lend anyone a hand if it could help lighten their load. A memorial service in celebration of Dexter's life will be held Sunday, October 10th at 3:00 pm at the East Chop Beach Club in Oak Bluffs. All are welcome to attend. In Lieu of flowers the family invites you to make a contribution to the East Chop Association for the Crystal Lake Fund. Preserving and saving Crystal Lake on Martha's Vineyard is a cause that was very near and dear to Dexter's heart. Contributions can be sent to East Chop Association for the Crystal Lake Fund, P.O. Box 1916, Oak Bluffs MA 02557.

Dexter P. Nerney, 74 of Oak Bluffs, MA died on Saturday, September 11th of natural causes on the Elizabeth Island of Nashawena. His loving wife Marilyn of 52 years was by his side. Dexter was born on February 25th, 1947 in Attleboro, MA.... View Obituary & Service Information

The family of Mr. Dexter Parmenter Nerney created this Life Tributes page to make it easy to share your memories.

Send flowers to the Nerney family.