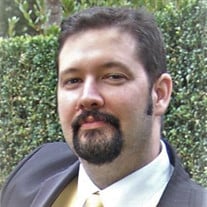 ATTLEORO – Dennis James Samuelian Jr., 45, of Attleboro, formerly of Seekonk, passed away unexpectedly on Tuesday, April 2, 2019 in the Sturdy Memorial Hospital. Born on January 15, 1974, in Pawtucket, RI he was a son of Dennis Samuelian Sr. and Joan (Wood) Maricola. Dennis was a graduate of Seekonk High School and he then furthered his studies at New England Tech Institute. He was self employed working in the sport advertising industry. Dennis was an avid sports fan, especially the San Francisco 49ers and the Pittsburgh Penguins. He was the mind and creator of the Twitter account, Tom Brady’s Ego which was once published in Sports Illustrated. In addition to his mother and father, Dennis is survived by his son, Austin Samuelian; his step-mother, Jean Samuelian; his step-father, David L. Maricola; sister, Tracy (Samuelian) Pierce; step-brothers, Scott Fontaine and Nathan Fontaine; his aunt, Gail Wood; his two uncles, Bryan Wood and Gilbert Wood Jr.; brother-in-law, Peter Pierce; his cousin Victor Elderkin and his former wife, Debra Russell Samuelian. He is predeceased by his grandparents, Gilbert Sr. and Grace Wood, George Samuelian and Marie Boyajian and his uncle Tom Wood. Relatives and friends are invited to attend a visitation from 4 – 7:30 p.m. on Friday, April 5, 2019 in the Duffy-Poule Funeral Home, 20 Peck Street, Attleboro, MA. A funeral home service will immediately follow the visitation at 7:30 p.m. in the funeral home. Burial will take place at a later date. In lieu of flowers, donations in Dennis’ memory may be made to the Autism Science Foundation, 106 West 32nd Street, Suite #182, New York, NY 10001 or directly at autismsciencefoundation.org/

ATTLEORO &#8211; Dennis James Samuelian Jr., 45, of Attleboro, formerly of Seekonk, passed away unexpectedly on Tuesday, April 2, 2019 in the Sturdy Memorial Hospital. Born on January 15, 1974, in Pawtucket, RI he was a son of Dennis Samuelian... View Obituary & Service Information

The family of Mr. Dennis James Samuelian Jr. created this Life Tributes page to make it easy to share your memories.

Send flowers to the Samuelian family.