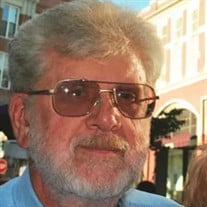 REHOBOTH - David H. Stevens, 77, affectionately known as “Bamp”, of Rehoboth, passed away on Sunday, January 17, 2021 at his home with his devoted wife, Kathleen (Larocque) Stevens by his side. Born on May 20, 1943 in Attleboro, MA, he was a son of the late David and Myrtle (Burr) Stevens. David grew up in Attleboro and was a graduate of Attleboro High School. Upon graduation, he went on to work for many years at Whiting & Davis as a machinist. He met Kathleen and they remained in North Attleboro until 1985, when they moved to the log cabin home he built, in Rehoboth. David’s passions included building and restoring antique cars and antique tractors. He could build or fix just about anything, including the POS 69 Ford Mustang he built with his son. However, his 32 Ford Coupe was his pride and joy and this led him to become the founding member of the Skunk Hollow Hot Rods Club. David loved baseball especially attending his grandchildren’s baseball games. He also loved to drive his old red tractor wearing his Amish hat pulling his grandchildren and all their friends during his annual “Halloween Hayride Festival”. He loved living on his farm, gardening, bird watching and fighting with the TV with Mema by his side. David always had his “secret candy jar” next to “His Chair” that no one knew about. No one knew about the chocolate in the top shelf of the left side of the refrigerator either. He will be remembered fondly for never having a Christmas tree under 10 feet tall. David is survived by his two children, Shelley Arseneault and husband Albert Joachim of Attleboro, and Michael Stevens and his wife Suzanne Stevens of Attleboro; his three grandsons, Ryan Arseneault and Wade and Hunter Stevens all of Attleboro; his brother-in-law Lawrence Larocque and his wife Mary, of Norton, he also leaves behind many nieces, nephews and “Ben” his beloved cat. David is predeceased by his mother-in-law, Eleanor Larocque and brother-in-law, Thomas “Guy” Larocque. The family would like to give a special thanks to “His Girls” at Sturdy Hospital Oncology Dept. and Jessica, his primary Nurse at the VNA. Relatives and friends are invited to attend a memorial visitation from 5-8 p.m. on Friday, January 22, 2021 at the Duffy-Poule Funeral Home, 20 Peck Street, Attleboro, MA. For the safety of those who wish to pay their respects, please do so in accordance with CDC, Federal and State guidelines including social distancing and the use of face masks. In lieu of flowers, donations can be made be made to the Attleboro Youth Baseball directly at http://www.attleboroyouthbaseball.net or mailed to PO Box 414, Attleboro, MA 02703.

The family of Mr. David H. Stevens created this Life Tributes page to make it easy to share your memories.

Send flowers to the Stevens family.