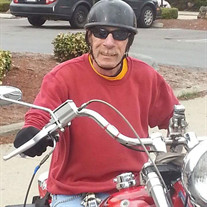 ATTLEBORO- David W. Houle, 63, of Attleboro, passed away peacefully at his home on Wednesday, May 2, 2018, surrounded by his dear family. He was the beloved husband to Karen “Kim” Murray of Attleboro. Born on October 6, 1954 in Attleboro, he was the caring son of the late Albert J. Houle Sr. and Irene D. (Ray) Houle. David worked for many years at the YMCA in Attleboro. He worked in the maintenance department and took great pride in a job well done. In his spare time, David loved fishing and watching his favorite sports teams, the Boston Bruins and the Oakland Raiders. He was also an avid motorcycle rider, participating in many charity rides over the years. Most of all, David lived for the cherished moments he spent with his wife and grandchildren. In addition to his wife, David is survived by his treasured son, Joshua Houle and his wife Catherine of Riverside, RI; his grandchildren, Joseph, Chace, Cadence and Calynne Houle; his sisters, Dale Marcotte of Pawtucket, RI, Laura Watters and her husband Alfred of North Attleboro and Linda Perry and her husband Robert of Attleboro; also many nieces, nephews and friends. David is predeceased by his two brothers, Neil Houle and Albert Houle Jr. and brother-in-law, Roland Marcotte. Relatives and friends are invited to attend a visitation on Monday, May 7th, 2018 from 5:00-8:00.p.m. at the Duffy-Poule Funeral Home, 20 Peck Street, Attleboro. Burial will take place privately at a later date.

The family of Mr. David W. Houle created this Life Tributes page to make it easy to share your memories.

Send flowers to the Houle family.