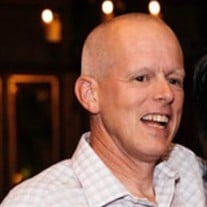 DOLLOFF – David “Davey”, 55, of Cumberland, RI and formally of Pawtucket, RI passed away peacefully surrounded by his family at HopeHealth Hulitar Hospice Center on Friday, July 16, 2021 after a three- and half-year battle with Early-onset Alzheimer’s. David is survived by his wife of 34 years, Kathleen (Hall) Dolloff. Born on August 27, 1965 in Pawtucket, RI he was a son of the late Richard and Joan (Falacco) Dolloff. David was a 1983 graduate of Davies Technical High School and was employed by Travelers Insurance Company for over 20 years before retiring in 2017. He loved to watch the New England Patriots and enjoyed his trips to the casinos. In addition to his wife, David is survived by his children, Ashley Lyn Gustafson and her husband Nick of West Warwick, RI, Kyle Dolloff and his wife Jessica of North Providence, RI and Cailee Calise and her husband Max of Cumberland, RI; his granddaughter, Amalia Joan Calise; his brother, Stephen Dolloff and his wife Maureen of Long Island, NY. He was the grandfather to the late Caden Robert Gustafson. Relatives and friends are invited to attend a visitation from 5-8 p.m. on Monday, July 19, 2021 at the Duffy-Poule Funeral Home, 20 Peck Street, Attleboro, MA. A funeral service will be held at 10 a.m. on Tuesday, July 20, 2021 at the Duffy-Poule Funeral Home. Burial will take place privately at a later date. In lieu of flowers, donations in David’s name may be made at www.wewalkthistogether.org supporting families & caregivers of those diagnosed with Young-Onset Alzheimer’s disease and other dementia related conditions.

DOLLOFF &#8211; David &#8220;Davey&#8221;, 55, of Cumberland, RI and formally of Pawtucket, RI passed away peacefully surrounded by his family at HopeHealth Hulitar Hospice Center on Friday, July 16, 2021 after a three- and half-year battle... View Obituary & Service Information

The family of Mr. David "Davey" Dolloff created this Life Tributes page to make it easy to share your memories.

Send flowers to the Dolloff family.