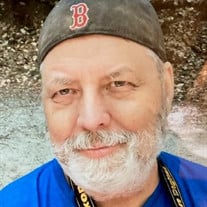 David S. Clemments died peacefully at his home on Saturday, February 27, 2021 after a hard fought battle against cancer. David is survived by his loving wife, Victoria Davenport-Clemments; his mother, Marjorie G. McCabe of Wichita, KS; his brother Paul and his wife Pamela of Sylvania, OH; his sister-in-law, Valerie P. Bryer; his brother-in-law, Allen S. Bryer and his wife, Ruth; and several nieces and nephews. David is preceded in death by his father Stephen, of Kansas & Florida. David was born on September 10, 1963 in Wichita, KS. He graduated from Northwest High School. David followed his dream to pursue a degree in culinary arts at the Culinary Institute of America and then furthered his education by achieving a degree in hotel and restaurant management at the University of New Haven. As a Certified Executive Chef, David took his talents across the country where his culinary creations impressed diners at restaurants, country clubs and private events, including a celebration for the internationally known winemaker, Robert Mondavi and family. David’s culinary vision excelled at international competitions, winning multiple awards including a Gold medal at the 2002 Expo Gastronomie in Luxembourg. A desire for a new challenge led David to Kerivan Lane where he pursued a career as a journeyman plumber and oil heat technician. He later advanced his position into plumbing sales, a change he joked brought on by his aging joints. David was an accomplished craftsman, taking his hand to renovations at his home and gardens. David was known to be generous with his time and knowledge and found great joy mentoring those with a desire to learn the skills of the trades. Those who knew David will remember him for his droll wit, his work ethic, his passion for all things culinary, his much loved Harley Davidson Road Glide CVO, his love for his wife, Victoria, his dedication to family and friends, his willingness to lend a hand, and, although not well known, his ability to ignore his allergy to cats. All are welcome to attend and celebrate David’s life at his wake on Friday, March 12, 2021, from 5-8pm at Duffy-Poule Funeral Home, 20 Peck St., Attleboro, and a Memorial Service on Saturday, March 13, 2021, at 11am. For the safety of those who wish to pay their respects, please do so in accordance with CDC, Federal and State guidelines, including social distancing and the use of face masks.

David S. Clemments died peacefully at his home on Saturday, February 27, 2021 after a hard fought battle against cancer. David is survived by his loving wife, Victoria Davenport-Clemments; his mother, Marjorie G. McCabe of Wichita, KS; his... View Obituary & Service Information

The family of Mr. David S. Clemments created this Life Tributes page to make it easy to share your memories.

Send flowers to the Clemments family.