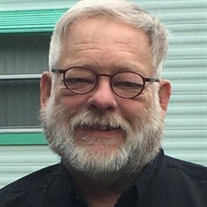 NORTON— Daryl B. Enos, age 60, passed away unexpectedly on February 25, 2020 at Sturdy Memorial Hospital, surrounded by his loving family. He was the beloved husband of Ann Enos, with whom he shared 37 years of marriage. Born in Boston, MA on January 8, 1960, he was a son of Virginia E. (Chute) Enos and the late Herbert C. Enos. Following his education, Daryl proudly served in The United States Navy as an air traffic controller, being stationed in places such as Maine, California, Iceland, Florida, and then changed ranks to draftsman, and finished his career stationed in Connecticut. After his retirement from the Navy, he worked as an EMT before becoming a dispatcher for the towns of Norwood and Mansfield. Daryl then went back to school to pursue a Bachelor’s Degree in Animation at Mass Art, where he graduated from in 2014. To all who knew him, Daryl was the brightest light in any room. He was always ready with a story, whether it was a play on words, bad joke, or groaner of a pun: Daryl’s humor and wit were felt deeply by everyone. He was known under aliases such as, Santa, Uncle Boo, Teddy Bear, and more than anything, he was a Tough Cookie. His passion for drawing, animating and all things art carried in to every aspect of his life from his love of all things geeky, to his artwork, and published children’s books. Above all else though, Daryl loved his family. His wife and daughters were more important to him than anything. He went through every length to make sure they felt loved and cared for at every corner of their life, and the memories he made with his entire family will last forever. Besides his dear wife and mother, Daryl is survived by his two beautiful daughters, Danielle Enos and her fiancé David Barberie of Norton, and Jennifer Enos of Norton; his four brothers, John Enos and his wife Kathleen of Londonderry, NH, David Enos and his wife Nancy of Jacksonville, FL, Ronald Enos of Raymond, NH, and Steven Enos and his wife Barbara of Richmond, VA; his siblings-in-law, Harry Jewett and his wife Maureen of Bolton, and Mary Pollauf and her husband Bob of Toledo, OH; his best friend Bob Bolger and his wife Lydia of Mansfield, as well as many beloved nieces and nephews. Daryl was the brother of the late Linda Enos, and brother-in-law of the late Lynne Simon and her husband Kenny Simon. Relatives and friends are invited to attend a visitation from 2 p.m. until 6 p.m. on Sunday, March 1st, 2020 at the Duffy-Poule Funeral Home, 20 Peck St., Attleboro. Burial with military honors will take place on Thursday, March 5th at 11:30 a.m. at the Massachusetts National Cemetery, Connery Ave., Bourne, MA. As an expression of sympathy, in lieu of flowers, donations in Daryl’s honor may be made to the family through GoFundMe, https://www.gofundme.com/f/5shd3s-family-of-daryl-enos?utm_source=customer&utm_medium=copy_link-tip&utm_campaign=p_cp+share-sheet

NORTON&#8212; Daryl B. Enos, age 60, passed away unexpectedly on February 25, 2020 at Sturdy Memorial Hospital, surrounded by his loving family. He was the beloved husband of Ann Enos, with whom he shared 37 years of marriage. Born in Boston,... View Obituary & Service Information

NORTON— Daryl B. Enos, age 60, passed away unexpectedly on February...