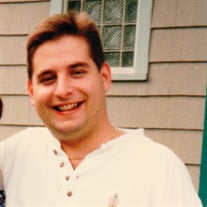 NORTON- Darren J. Horn, 48, of Norton, passed away at his home suddenly, but peacefully on Saturday, September 8, 2018. Born on February 22, 1970 in Hazleton, Pennsylvania, he was the adored son to Karl Horn and the late Patricia Cecelia (Hoffmann) Horn. Darren grew up in Seekonk and was a graduate of Seekonk High School. Following graduation, he moved to Cleveland, Ohio, where he lived for a number of years but eventually moved back to the Attleboro area. He spent most of his professional career working in the hotel industry. In his younger years, Darren was quite the athlete, mostly excelling in baseball and basketball. His love for playing sports inspired his steadfast allegiance to his cherished New York sports teams. Just like his father, he enjoyed rooting for and watching the New York Yankees and New York Giants. He will be fondly remembered for his quick wit and open sense of humor. Darren’s engaging personality was appreciated by many, as well as his deep care for others. He could always be counted on to check in to see how someone was doing and making sure that everything was going well, and offering to help if needed. Most importantly, Darren knew the value of family and tried to stay connected with them as much as possible. He left this world too early, but he will be deeply missed and warmly remembered by all. In addition to his dear father, Darren his survived by his treasured siblings, Christopher Horn and his wife Michelle, Denise Lincoln and her husband Rodger, and also Jeffrey Horn and his wife Karen; his cherished nieces, Lucy Horn, Rachel Lincoln, Olivia Horn, and Marissa Horn; his loving nephews, Nathan Horn, Rodger Lincoln, Robby Lincoln, and Nick Horn; and also many extended family members, friends, and former co-workers. Darren is predeceased by his mother. Memorial visitation will be held on Saturday, September 15th from 11 am -12:30 pm followed by a funeral service at 12:30 in the Duffy-Poule Funeral Home, 20 Peck Street, Attleboro, MA. In lieu of flowers, donations in Darren’s name may be made to the charity of one’s choice.

NORTON- Darren J. Horn, 48, of Norton, passed away at his home suddenly, but peacefully on Saturday, September 8, 2018. Born on February 22, 1970 in Hazleton, Pennsylvania, he was the adored son to Karl Horn and the late Patricia Cecelia (Hoffmann)... View Obituary & Service Information

The family of Mr. Darren J. Horn created this Life Tributes page to make it easy to share your memories.

Send flowers to the Horn family.