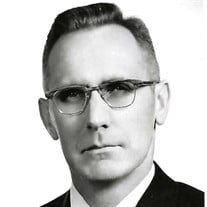 Cyril (Cy) N. Harper of Mansfield, MA died on December 20th at Sturdy Memorial Hospital. He was born in Wakefield, MA on October 21, 1920, to Ira J. Harper and Charlotte Downes Harper. He is survived by his wife of 69 years, Joan (Lilley) Harper, his son, Thomas Harper of Myrtle Beach, SC, his daughters: Carol (Harper) Massa of Attleboro, Jane (Harper) McQuaid and husband, Edward of Bonita Springs, FL and Amy (Harper) Carlson and husband, William of North Attleboro; 7 grandchildren: Tami (Massa) Keary and husband Michael of Hingham, MA, Gary Massa of Attleboro, MA, Ashley (Massa) Burke and husband, Ryan of Foxboro, MA, Ellen McQuaid of Foxboro, MA, James McQuaid and wife, Stephanie, Emily Carlson of North Attleboro and Samantha Carlson of North Attleboro, MA, and six great grandchildren: Camryn and Meghan Keary of Hingham, Caleb and Evan Burke of Foxboro and Bailey and Devin McQuaid and several nieces and nephews. He was predeceased by his brother, Lt. Col. Stanley Harper, Henry Harper, Arthur Harper, a marine who was killed in WWII in the landing in Guam, and his sisters, Helen (Harper) Pendergast and Charlotte (Harper) Green. He was a graduate of Lowell Tech, (now University of Lowell, MA). Cy was a Captain in the Army Air Force in WWII and served in communications in the Occupation Forces in Germany. Upon discharge from the service, he worked at the Textile Research Institute in Princeton, NJ while attending the graduate school of Princeton University. He was employed at Easthampton Rubber Thread Company, a division of United Elastic in Easthampton, MA as a chemist and Research Director. He also was employed at Fulflex Division of the George C. Moore Company in Bristol, RI. Cy was an avid sports fan. He played baseball in college and while in the service as well as participated in golf, bowling and softball leagues. He was a vestryman and a senior warden at St. Philips Church in Easthampton, MA. He was also active in St. John’s Church in Barrington, RI, where he lived for 40 years after moving from Easthampton, MA. He also was a Tax Aide volunteer for AARP in Barrington, RI for 15 years. Cy and Joan were square and round dancers and were members of the Town Howlers Club. A private memorial service will be held with burial in the Memorial Gardens at St. John’s Church, Barrington, RI. In lieu of flowers, donations in Cy’s name may be made to the Army Historical Foundation, 1775 Liberty Dr., Suite 400, Fort Belvoir, VA 22060 (www.Thenmusa.org).

Cyril (Cy) N. Harper of Mansfield, MA died on December 20th at Sturdy Memorial Hospital. He was born in Wakefield, MA on October 21, 1920, to Ira J. Harper and Charlotte Downes Harper. He is survived by his wife of 69 years, Joan (Lilley)... View Obituary & Service Information

The family of Mr. Cyril "Cy" N. Harper created this Life Tributes page to make it easy to share your memories.

Send flowers to the Harper family.