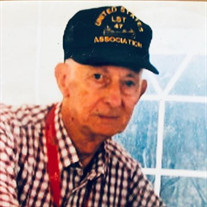 ATTLEBORO - Clifford E. Danue, 93, known to friends and family as Tooti, passed away on Tuesday, March 26, 2019 at the Sturdy Memorial Hospital in Attleboro. He was the beloved husband of 58 years to the late Mary (Giannitelli) Danue. Born on May 16, 1925 in Mansfield, MA, he was a son of the late Clifford E. Danue and Bridget (Tatley) Danue. Clifford grew up in Mansfield but had been a resident of Attleboro the past 73 years. At the age of 17, Clifford enlisted in the United States Navy. He served on a Tank Landing Ship, LST-47, from April 6, 1943 to March 11, 1946 with the rank of Seaman First Class. During his military career he served in Europe, including the invasion of Normandy from June 6 to June 25, 1944. He was part of the invasion of Southern France from August to September 1944. He then served in the Pacific, which included the Battle of Okinawa from June 26 to June 30, 1945. Lastly, he was part of the occupation of the Far East until March 11, 1946. Clifford received the following medals during his dedicated service: Asiatic-Pacific Campaign Medal, with one Bronze (combat) Service Star, European-African-Middle Eastern Campaign Medal, with two Bronze (combat) Service Stars, World War II Victory Medal, Navy Occupation Service Medal and the Philippine Liberation Medal. After his honorable discharge from the Navy, Clifford worked as short-order cook and then for most of his life he was employed as an inspector at the Foxboro Company. He loved to travel, especially by auto and train. Clifford was a 40-year season ticket-holder for the NE Patriots, but especially was a die-hard Red Sox fan. He watched spring training in Florida with his son for more than 30 years, including this spring where he was honored in Fort Myers, FL as a WWII Veteran. Clifford was a longtime communicant of Saint John the Evangelist Church in Attleboro. Clifford is survived by his loving son, Clifford Danue of Attleboro and several nieces and nephews. He is predeceased by two sisters, Barbara Bonin and Louise Danue and a brother, Francis D. Danue. Relatives and friends are invited to attend a visitation on Friday, March 29, 2019 from 4 to 7 p.m. in the Duffy-Poule Funeral Home, 20 Peck Street, Attleboro. A funeral will be conducted at 10:30 a.m. on Saturday, March 30, 2019 from the Duffy-Poule Funeral Home, followed by a Mass of Christian Burial at 11:30 a.m. in St. John the Evangelist Church, 133 North Main Street, Attleboro officiated by the Rev. Michael Giannitelli. Burial with military honors will follow in St. John’s Cemetery, Attleboro.

ATTLEBORO - Clifford E. Danue, 93, known to friends and family as Tooti, passed away on Tuesday, March 26, 2019 at the Sturdy Memorial Hospital in Attleboro. He was the beloved husband of 58 years to the late Mary (Giannitelli) Danue. Born... View Obituary & Service Information

The family of Mr. Clifford E. Danue created this Life Tributes page to make it easy to share your memories.

Send flowers to the Danue family.