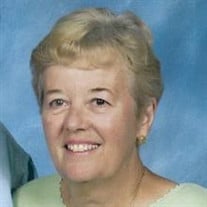 Carol M. Kollet, 83, of South Attleboro and Port Charlotte, FL, passed away peacefully on June 25th at Brigham and Women’s Hospital after a courageous battle with cancer. She was the beloved wife of William Kollet to whom she was married for over 62 years. Born in Pawtucket, RI on March 8, 1938, she was the loving daughter of the late John J. and Grace M. (Holden) Beard. Carol grew up and was educated in Pawtucket, RI. She was a graduate of Tolman High School and the former Hubbard Business School in Pawtucket, RI. Carol and Bill made their home in South Attleboro. After they retired, in true “snow bird” fashion, they split their time between Sand Castle Estates in Attleboro during the summer and The Village of Holiday Lakes in Port Charlotte, FL during the winter. Carol was employed as a book keeper in the Attleboro school system until she retired in 2000. She had also worked in the offices of Ann & Hope and Texas Instruments. When her children were young, she sewed dance costumes in her home for PEKO Creations. Carol loved life. She loved line dancing, wine and cheese parties, and bus trips to Foxwoods and Biloxi, Mississippi. As a member of the Good Sam Club and the Morning Glory Club, she enjoyed camping in both New England and Florida. An ardent game player, she excelled in Scrabble and card games like Gin Rummy and Uno. Most of all, she was an avid Red Sox fan, cheering them on and coaching them spiritedly from her chair in the living room. In addition to her loving husband, she is survived by her three children, Steven Kollet of Fall River, Kenneth Kollet of Attleboro, and Betsy Chiasson and her husband Joe of North Attleboro; her grandchildren, Aimee, Michael, and Emily Chiasson; and her great-grandson, Remy. She was the sister of John J. Beard of North Attleboro, Cynthia Brown of Attleboro, and Jeffrey P. Beard of Georgia. Funeral arrangements have been entrusted to Duffy-Poule Funeral Home. Visitation has been respectfully omitted. A private graveside service will be held by the family. In lieu of flowers, donations in her memory may be made to the Dana-Farber Cancer Institute, P.O. Box 849168, Boston, MA 02284 or via www.jimmyfund.org/gift.

Carol M. Kollet, 83, of South Attleboro and Port Charlotte, FL, passed away peacefully on June 25th at Brigham and Women&#8217;s Hospital after a courageous battle with cancer. She was the beloved wife of William Kollet to whom she was married... View Obituary & Service Information

The family of Mrs. Carol M. Kollet created this Life Tributes page to make it easy to share your memories.

Send flowers to the Kollet family.