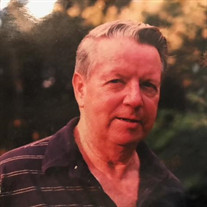 Attleboro – Carl Frederick Leahy, 86, lifelong resident of Attleboro, passed away in his home surrounded by his loving family on May 12, 2018. He was the loving husband of Shirley M. (Hayes) Leahy for over 62 years. Born on March 16, 1932, in Attleboro, MA he was a son of the late Jerome P. and Louise W. (Gempp) Leahy. Carl proudly served in the United States Navy as an engineman during the Korean War. When returning home from the war he worked at Texas Instruments as a master toolmaker for 42 years until his retirement. Carl was a coach for the Jr. All American Football League which he truly loved. He was active in NASCAR at the Seekonk Speedway and was an owner of a race car. Carl enjoyed spending summers at the cottage in Warren, RI with family and friends. In addition to his wife, Carl is survived by his children, Dan Leahy and his wife Pat, Kathleen Moreau and her husband Peter, William Leahy and his wife Karen, Carla Leahy, Peggy Mahoney and her husband Dana, Michael Leahy and his wife Shannon and Maryann Gustafson and her husband Scott; proud grandfather of 12, Bryan, Scott, Tim and Megan Leahy, Julie, Jennifer and Matthew Moreau, Connor, Jack and Katherine Spillane and Cullen and Kenna Leahy; his loving 4 great grandchildren and also many nieces and nephews. He was the father of the late David Leahy. Relatives and friends are invited to attend a visitation on Tuesday, May 15 from 4:00 - 7:00 p.m., in the Duffy-Poule Funeral Home, 20 Peck Street Attleboro. A Funeral Service will be held on Wednesday, May 16, 2018 at 10:00 a.m. at All Saints Episcopal Church, 121 North Main Street, Attleboro, MA. Burial with military honors will follow in Hillside Cemetery, Attleboro. In lieu of flowers, memorial donations may be made to Community VNA, 10 Emory St., Attleboro, MA 02703 or online at www.communityvna.com/donate or a charity of your choice.

Attleboro &#8211; Carl Frederick Leahy, 86, lifelong resident of Attleboro, passed away in his home surrounded by his loving family on May 12, 2018. He was the loving husband of Shirley M. (Hayes) Leahy for over 62 years. Born on March 16,... View Obituary & Service Information

The family of Mr. Carl Frederick Leahy created this Life Tributes page to make it easy to share your memories.

Send flowers to the Leahy family.