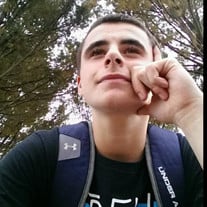 Brendan Thomas Goguen, 23, of North Attleboro, formerly of Attleboro, passed away unexpectedly on Friday, April 2, 2021. Born on August 25, 1997 in Attleboro he was the son of Sharron L. (Birch) Goguen of North Attleboro and the late Gregory David Goguen. Brendan was a graduate of Attleboro High School. While attending Attleboro High, Brendan played point guard for the varsity basketball team as a freshman. He was also an all-star baseball player for Attleboro. After high school, Brendan worked in the construction industry. Brendan was an avid sports fan, playing and watching baseball, hockey, golf, football and especially basketball. He treasured his mother’s cooking, time spent with friends and family get-togethers. Brendan loved swimming especially in the ocean. He had a smile that would light up a room and everyone always commented on how stunning his hazel eyes were. In addition to his mother, Brendan is survived by his sister, Courtney Goguen and her fiancée Danielle Zavalcofsky both of New Bedford; Thomas Cox, fiancé of Sharron of North Attleboro; his aunts and uncles, Thomas Birch Jr. of Attleboro, Joy Birch-Gonsalves of Central Falls, RI, Laurie and Dave Hardman both of Seekonk, Timothy and Colleen Birch both of Attleboro, Valerie and Scott Shirley both of Brentwood, TN and Gail and Chris Carver both of Salem, NH; also several cousins, second cousins, many extended family members and the Cox Family. Brendan was predeceased by his grandfather, Thomas L. Birch Sr., grandmother, Annette M. Birch, his uncle, Joseph Maria Gonsalves and his cousin, Joshua Michael Birch. Relatives and friends are invited to attend a visitation from 4-8 pm on Wednesday, April 14, 2021 at the Duffy-Poule Funeral Home, 20 Peck Street, Attleboro, MA. A Mass of Christian Burial will be held at 10 am on Thursday, April 15, 2021 at St. John the Evangelist Church, 133 North Main Street, Attleboro. Burial will follow in Mount Hope Cemetery and Arboretum, North Attleboro. For the safety of those who wish to pay their respects, please do so in accordance with CDC, Federal and State guidelines including social distancing and the use of face masks. After the death of his father, Brendan became overcome by addiction because he was unable to express his feelings which is a large part of addiction. If you are suffering with addiction or alcoholism or have a family member afflicted with the disease do not hesitate to ask for help. Contact AA or NA. Two foundations that touched Brendan’s life were the Gavin Foundation and the Washburn House. The Goguen family would like to thank both organizations for their care and support given to Brendan. In lieu of flowers, donations in Brendan’s memory may be sent to the Gavin Foundation, c/o Development Department at 675 East 4th Street, South Boston, MA 02127 or directly at http://www.gavinfoundation.org/donate

The family of Mr. Brendan Thomas Goguen created this Life Tributes page to make it easy to share your memories.

Send flowers to the Goguen family.