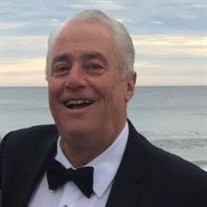 REHOBOTH – Bradley Douglas Keith, 64, of Rehoboth, passed away on Friday, October 4, 2019 in his home surrounded by his loving family after a brief but courageous 4 ½ month battle with cancer. He was the devoted husband of Susan (Lapierre) Keith for the past 45 years. Born on March 11, 1955 in North Attleboro, MA he was a son of the late Francis and Ann (McGann) Keith. Brad grew up in North Attleboro, where he attended St. Mary’s Grammar School and later Bishop Feehan High School. After high school, Brad attended Bristol Community College. He was employed by Greylawn Foods, Roger Williams Foods, Quarex of Boston and for the last 25 years, AGAR Supply which was purchased by Reinhart Food Supply in 2012. Brad enjoyed playing golf and was a member of Segregansett County Club for the last 14 years. He also enjoyed walking with his beloved Irish Wolfhound “Finnegan”, spending time with his family and as of late, his time on the farm doing barn chores. In addition to his wife, Brad is survived by his three sons, Kristopher Keith and his wife Courtney (Snow) of Rehoboth, Bradley A. Keith and his wife Kristy (Carbone) of Capistrano Beach, CA, Jonathan Keith and his wife, Stephanie (Witherell) of Peekskill, NY; his eight grandchildren, Kayla, Makenzie, Kaycee, Emily, Chase, Cameron, Kennedy and Kelleigh Keith; his father and mother-in-law, Armand and Loretta (MacDougald) Lapierre of Attleboro; his brother and sister-in-law’s, Linda and Jimmy Beith, Paul and Elaine Lapierre, Peter Lapierre, Carol and George Glenn, Laurie and Paul Ringuette, Michele and Brendan Doherty, Maria and Mitch MacDonald, Christopher Lapierre and Jennifer Reed; also numerous beloved nieces and nephews. Relatives and friends are invited to attend a memorial visitation from 4-8 p.m. on Wednesday, October 9, 2019 in the Duffy-Poule Funeral Home, 20 Peck Street, Attleboro. A memorial service will be held at 10 a.m. on Thursday, October 10, 2019 in the funeral home immediately followed by a burial in the Rehoboth Village Cemetery, Bay State Road, Rehoboth. In lieu of flowers, donations in Brad’s name may be made to the Gary Sinise Foundation directly at https://www.garysinisefoundation.org/donate/

REHOBOTH &#8211; Bradley Douglas Keith, 64, of Rehoboth, passed away on Friday, October 4, 2019 in his home surrounded by his loving family after a brief but courageous 4 ½ month battle with cancer. He was the devoted husband of Susan (Lapierre)... View Obituary & Service Information

The family of Mr. Bradley Douglas Keith created this Life Tributes page to make it easy to share your memories.

Send flowers to the Keith family.