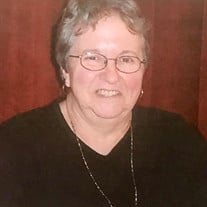 Beverly A. (Bourbeau) Jennings, formerly of N. Carl Annon Court, Foxborough, MA, passed away peacefully in the arms of family during the early morning hours of March 26th, 2019, at the Victoria Haven Nursing Facility in Norwood, MA. Born in Turners Falls, MA on March 10, 1944, Beverly was 75 years old and the eldest child of Leonard F. and Margaret M. (Sowell) Bourbeau. She leaves behind two surviving siblings, Barbara Gibson (Bourbeau) of Greenfield, MA and Brent Bourbeau of Turners Falls, MA, as well as 3 children, 5 grandchildren, 3 great‐grandchildren, and several nieces, nephews, and cousins. Beverly attended school in Turners Falls, MA, and was an energetic supporter of her high school football team, the Turners Falls Indians. She took piano lessons when she was young, sparking a lifelong love of music, and was a natural musician and performer. She played timpani in the high school band and snare drum in the marching band. She also taught herself to play accordion and guitar. In her early years she was an enthusiastic participant in the local 4H club, played Little League baseball, and volunteered with the local Special Olympics. After graduation from high school, she married Donald W. Jennings and they had three children: Don Jennings of San Antonio, TX; Margaret "Jodi" Buckman of Norwood, MA; and Tim Jennings of Pawtucket, RI. Bev loved animals, and in the 1970s was co‐owner and operator of a small dog grooming and pet store called "The Barking Lot" on Third St. in downtown Turners Falls. Her kids have fond memories of the unsold puppies who grew up to live in a rollicking pack at their home on Central Street, where the upright piano in the living room was often surrounded by friends as Bev played popular favorites late into the night. Beverly shared her musical talents in a wide variety of settings, traveling with her family across the country and filling various positions within the Salvation Army's Department of Social Services. Later the family settled in Sharon, MA where she was the Administrative Director of the Salvation Army’s Hillcrest Lodge Conference and Retreat Center. Hillcrest’s dining hall often rang with piano music and singing as Bev entertained the residents with old‐time classics. Bev sincerely enjoyed working with the elderly, and worked as Director of Activities for both The Maples in Wrentham, MA, and Meadow Green Nursing Facility in Waltham, MA. She also worked as a Recreation Therapist at the Wrentham State School for several years, and enjoyed her work with The Wrentham Council on Aging as director of the “Wrentham Sweet Sixties", a travel group of senior citizen choristers. In later years Beverly took her musical abilities on the road, starting her own small business as an entertainer at nursing facilities, women's clubs, hospitals, retirement communities, fraternal organizations and other venues throughout New England. She was also the pianist and organist for several fine area churches and choirs, most recently The United Church of Norwood, where she was a member for 15 years, retiring in 2012. Finally, no remembrance of Beverly would be complete without mention of her best friend and partner of more than 25 years, Virginia Holladay, who passed away in 2011. Beloved by both their extended families, Ginny was the choir director to Bev’s keyboard accompaniment, and the annual “Living Christmas Tree” concert at Trinity Church and later the United Church of Norwood were not‐to‐be‐missed holiday events for decades. The Jennings Family would like to thank the Victoria Haven Nursing Facility and the Ascend Hospice staff for the kind and loving care they provided during Beverly’s last 15 months. They’d also like to thank Duffy‐Poule Funeral Home in Attleboro for their help and service. Services were held at the United Church of Norwood, 595 Washington St, Norwood, MA 02062, on April 27, 2019. Interment will be at Springdale Cemetery, Turners Falls, MA, at a later date. Donations in Beverly's memory may be made to the American Heart Association, 300 5th Avenue, Suite 6, Waltham, MA 02451. Online: www.heart.org/donate

The family of Beverly A. Jennings created this Life Tributes page to make it easy to share your memories.

Send flowers to the Jennings family.