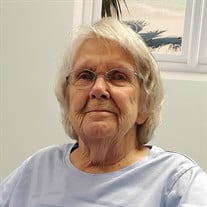 WRENTHAM – Barbara A. Lovenbury, 91, of Wrentham formerly of Attleboro, passed away on Sunday, October 24, 2021 at the Serenity Hill Nursing Center, Wrentham. She was the wife of the late Thomas Lovenbury. Born on March 26, 1930 in Attleboro, she was a daughter of the late Curtis R. and Ethel Mae (Hanscom) Wilbar. Barbara was employed by the First National Stores until her retirement. She enjoyed crocheting hats and blankets at the Senior Center for area hospitals, nursing homes and veterans. She is survived by her two daughters, Deborah Lemonde and her husband Don of Plainville and Carol Chalifoux of Dighton; her son, Raymond Chalifoux and his wife Kate of Knoxville, TN; her grandchildren, Scott Lemonde of Walpole, Wendy Ricci of Waltham, Amy Chalifoux of Boulder, CO, Brian Chalifoux of Lowell, Sarah Chalifoux of Rennes, France, Elizabeth Chalifoux of Brunswick, Ohio, Matthew Chalifoux of Knoxville, TN and Emily Chalifoux of Knoxville, TN; also, her five great grandchildren. Barbara was the mother of the late George and Thomas Chalifoux. The family would like to extend their thanks to the staff at Serenity Hill Nursing Center for the care and compassion shown to Barbara. Relatives and friends are invited to attend a memorial visitation from 10 – 11:30 a.m. on Tuesday, November 9, 2021 at the Duffy-Poule Funeral Home, 20 Peck Street, Attleboro. A funeral home service will immediately follow at 11:30 a.m. In lieu of flowers, donations may be made to a charity of ones choice in Barbara's memory. Burial will take place privately at the Massachusetts National Cemetery, Bourne, MA.

WRENTHAM &#8211; Barbara A. Lovenbury, 91, of Wrentham formerly of Attleboro, passed away on Sunday, October 24, 2021 at the Serenity Hill Nursing Center, Wrentham. She was the wife of the late Thomas Lovenbury. Born on March 26, 1930 in... View Obituary & Service Information

The family of Mrs. Barbara A. Lovenbury created this Life Tributes page to make it easy to share your memories.

WRENTHAM – Barbara A. Lovenbury, 91, of Wrentham formerly of...

Send flowers to the Lovenbury family.