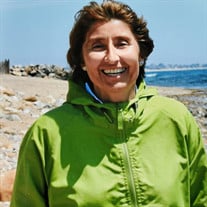 BARBARA A. LEVESQUE, 1957-2022 It is with profound sadness that we as a family note the death of our sister, Barbara A. Levesque, of Rehoboth, MA. After 11 years of fighting early-onset Alzheimer’s, which she confronted with her usual stubbornness and tenacity, Barbara succumbed to this insidious disease on January 15, 2022. When Barbara was diagnosed, her neurologist advised her to remain physically active. No longer could she complete crossword puzzles, read books or follow maps into a well-deserved retirement. But staying active was easy medicine for such an avid walker and hiker. She was walking up to 3 miles a day only months before her death. Her feet became her voice. As long as she could walk, she had some control of her fate. She was the independent woman who would not surrender. In the end, her “red shoe ramblings” turned to strolls through her garden or shuffles along a hospital hallway. Barbara’s feet were firmly planted on the ground from an early age. She was born Sept. 18, 1957, and grew up in Coventry, RI. She attended public schools and went on to the University of Maine, where she received a bachelor of science degree in forest management. Upon graduation, Barbara joined the U.S. Forest Service, where she worked for nearly 30 years. She spent most of that time managing forests, timber sales, environmental issues and woodland fires in New Hampshire, Montana and Idaho. Barbara loved every moment of her career, even as she fought many battles to pave the way for women who followed in her boot steps. In 2009, she was named the Idaho City District Ranger within the Boise National Forest and maintained that position until her retirement in 2011. After retiring, Barbara volunteered with the Rehoboth Council on Aging and helped deliver meals on wheels for several years. She developed friendships with all the meal recipients and listened to their struggles with good humor and compassion. Never once did she let on to her own battle with Alzheimer’s. Barbara’s loving and devoted parents, Lucien and Margaret Levesque, preceded her in death. She will be missed and her memory cherished by her siblings and their spouses: David Levesque (Jane), Susan Short (Francis), John Levesque (Anne Foster), Joan Levesque Arguin (Ralph), and Robert Levesque (Cindy). Barbara was a funny and mischievous aunt to her niece, Amy Short, and nephews, Nathan, Daniel, Patrick and Andrew Short, and Stuart, Lewis and Mitchell Levesque. Most recently, Barbara focused her sense of fun and hijinks on great-niece Isabella Arguin and great-nephews Vincent and Dante Arguin and Aiden and Owen Short. Barbara’s services will be held privately and a joyful rambling to honor Barbara’s memory will be held later this year. All of her social media followers and fellow red shoe ramblers will be invited to join us. Burial will take place privately. Donations in Barbara’s memory can be made to the Alzheimer’s Association (www.alz.org) or the Idaho Food Bank (www.Idahofoodbank.org)

BARBARA A. LEVESQUE, 1957-2022 It is with profound sadness that we as a family note the death of our sister, Barbara A. Levesque, of Rehoboth, MA. After 11 years of fighting early-onset Alzheimer&#8217;s, which she confronted with her usual... View Obituary & Service Information

The family of Ms. Barbara Anne Levesque created this Life Tributes page to make it easy to share your memories.

It is with profound sadness that...

Send flowers to the Levesque family.