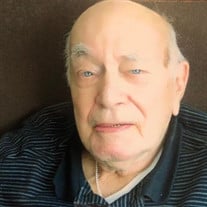 SMITHFIELD, RI – Arnold T. Fox, 93, of Smithfield, RI, formerly of Attleboro, passed away peacefully on Monday, November 4, 2019 surrounded by family and his loving wife of 70 years, Anna (Rudowski) Fox in the Smithfield Woods Senior Living. Born on March 7, 1926 in Pawtucket, RI he was a son of the late Arnold and Leonie (Morris) Fox. As a graduate of Charles E. Shea High School in Pawtucket, Arnold enlisted in the United States Army, proudly serving his country during WWII. He fought with the 69th Infantry Division during the European Campaign. Upon returning home from the War, Arnold worked as a tool maker for Brown and Sharpe and later for Texas Instruments for over 30 years before his retirement. Arnold always had an interest in aviation and obtained his pilots license. He was a true handyman and loved working on things around the house and also helping others with their projects. He enjoyed spending summers in Bonnet Shores and time with his beloved family. Arnold was a communicant of St. John the Evangelist Church in Attleboro a member of the 69th Infantry Division Association. In addition to his wife, he is survived by his daughter, Patricia Brownell and her husband Jeffrey of Smithfield, RI; his two grandchildren, Justin Brownell and his wife Sarah of North Attleboro and Rachel Brownell of West Warwick, RI; his sisters, Claire Sacharko of Cranston, RI and Joan Goodman of North Kingston, RI; his daughter-in-law, Mary Fox of South Attleboro; a sister-in-law, Diane Fox of Woodbridge, NJ and also many nieces and nephews. He was the father of the late David and Thomas Fox and brother of the late James and David Fox. Relatives and friends are invited to attend a visitation from 11 am – 12 p.m. on Saturday, November 9, in the Duffy-Poule Funeral Home, 20 Peck Street, Attleboro. A funeral home service will immediately follow at 12 pm. Burial will take place at St. John’s Cemetery, Attleboro.

The family of Mr. Arnold T. Fox created this Life Tributes page to make it easy to share your memories.

Send flowers to the Fox family.