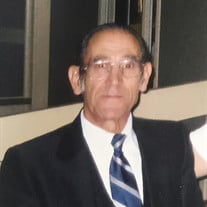 ATTLEBORO – Antonio F. DaSilva, 83, of Attleboro passed away unexpectedly on Thursday, November 22, 2018 at his home. He was the loving husband of the late Alda M. DaSilva whom passed away in 2011. Born on April 17, 1935 in St. Miguel, Azores he was a son of the late Antonio DaSilva-Amorim and Maria E. Fernandes. Antonio moved from Portugal in 1968 and settled in Attleboro where he has been a resident since. He was employed at Larson Tool as a machinist for several years before his well-deserved retirement in 2001. Antonio enjoyed gardening, yard work and spending time with his beloved family. He was a longtime member of the Portuguese American Club and communicant of St. Vincent de Paul Church both in Attleboro. He is survived by his son, Stephen DaSilva and his wife Jennifer of Attleboro; his daughter, Stacy DaSilva of Cranston, RI; his two grandchildren, Lucy and Tyla DaSilva both of Attleboro; siblings John Amorim, Judyth Lopes, Fatima Gaspar, Theresa Branco and Philmoena Viveiros all of Attleboro and Conceicao Ferreira of New Bedford; and also several nieces and nephews. He was the brother of the late Jose Amorim, Francisco Silva, Manuel Amorim and Isabel Galvao. Relatives and friends are invited to attend a visitation from 10 a.m. – 12 p.m. on Monday, November 26, 2018 in the Duffy-Poule Funeral Home, 20 Peck Street, Attleboro. A funeral service will be held immediately following visitation at 12 p.m. in the funeral home. Burial will follow in St. Stephen’s Cemetery, Attleboro. In lieu of flowers, donations in Antonio’s name may be made to the Prostate Cancer Foundation 1250 Fourth Street, Santa Monica, CA 90401 or directly at www.pcf.org

The family of Mr. Antonio F. DaSilva created this Life Tributes page to make it easy to share your memories.

Send flowers to the DaSilva family.