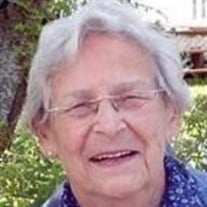 Anna May (Kudrnac) Bono, 94, of Attleboro, died Saturday, May 15, 2021. Anna was born on Valentine’s Day, 1927, in Hyde Park, Boston, to Augustus “Gus” and Elizabeth “Bessie” Kudrnac, née Powers. She was the third of four girls, all of whom she outlived. The family moved to Attleboro when she was very young, and she remained there for most of her life. She attended public schools in Attleboro, graduating from Attleboro High School in 1945. On September 10th, 1949, she married Joseph Bono and the couple moved to Crystal River, Florida, just six weeks after the birth of their first child, Paul. The family moved back to Attleboro two years later, where they lived for a time with her in-laws. More children would follow: Cynthia, Ruth, and Christopher. In her early years she displayed talent as an artist; in high school she drew illustrations for her yearbook. She also took many years of dance and acrobatics instruction along with her sisters, which she enjoyed very much. Anna was a devoted wife and mother, staying home to raise her four children. She attended business school as a young woman, working as a secretary in downtown Attleboro. Later, she rejoined the workforce as a switchboard operator at Sturdy Memorial Hospital in the 1970s. She spent the rest of her career doing medical clerical work at various doctors’ offices in Attleboro and North Attleborough. Starting in the 1960s, the family enjoyed summering in Westport, Massachusetts, eventually building a cottage there. This was one of Anna's favorite getaways. She and Joseph looked forward every summer to visits from their children, grandchildren, and great-grandchildren. Above all, Anna cherished her family, providing for them a lifetime of support and sacrifice in ensuring their success and happiness. She was a lifetime members of St. John’s Church in Attleboro. Anna is survived by her children, Paul (Linda), Cynthia, Christopher (Cindy), and Ruth; her grandchildren, Emily, Alison, Carla, Lauren, Rebekah, and Natalie; and her great-grandchildren, Liam, Paige, Benjamin, and Joseph. Relatives and friends are invited to attend visitation on Monday, May 24, 2021 from 4-7 PM at Duffy-Poule Funeral Home, 20 Peck Street, Attleboro. The funeral will be conducted on Tuesday, May 25, 2021 at 9 AM from the Duffy-Poule Funeral Home, followed by a Mass of Christian Burial at 10 AM at St. John the Evangelist Church, 133 N. Main St., Attleboro. Burial will follow at St. John Cemetery, Attleboro.

The family of Mrs. Anna May Bono created this Life Tributes page to make it easy to share your memories.

Send flowers to the Bono family.