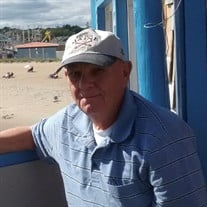 ATTLEBORO- Andrew A. Figuerado Sr., 87, of Attleboro, passed away peacefully on Wednesday, May 23, 2018, at his home in Attleboro. He was the devoted husband for 60 years to Ida (Brochu) Figuerado of Attleboro. Andrew was born on November, 6, 1930 in Seekonk, MA and was the beloved son to the late Manuel and Mary (Glowski) Figuerado. A longtime resident of Attleboro, he spent his younger years growing up in Saco, Maine. Andrew was an honored and proud Korean War Veteran serving in the United States Army until his honorable discharge. Having a talent and passion for cooking, Andrew worked many years as a cook. He was a longtime employee at Morin’s Diner, where he worked as a cook and also in the catering division. Andrew owned and operated his restaurant, Andy's Cafeteria, while also spending time working at Kilmartin Industries Incorporated. In addition to his dear wife of 60 years, Andrew is survived by his loving children, Michael Figuerado and his wife Donna of Rehoboth, Robert Figuerado of North Attleboro, David Figuerado and his wife Maureen of Dade City, Florida, Mark Figuerado and his wife Pat of Pawtucket, RI and also his late son Andrew Figuerado Jr. and his fiancé Dawn; his 13 grandchildren and 8 great-grandchildren; his brother Louis Figuerado of Warwick, RI; and also many nieces, nephews and friends. In addition to his son, Andrew Jr. and his parents, Andrew is predeceased by his brothers, Arthur Figuerado and Lawrence Arden. Relatives and friends are invited to attend a visitation on Tuesday, May 29, 2018, from 4 to 7 p.m. in the Duffy-Poule Funeral Home, 20 Peck St., Attleboro. A funeral will be conducted on Wednesday, May 30, 2018, at 9 a.m. from the Duffy-Poule Funeral Home, followed by a Mass of Christian Burial, at 10 a.m., in St. John the Evangelist Church, 133 North Main St., Attleboro. Burial with military honors will follow in St. Stephen’s Cemetery, South Main Street, Attleboro. In lieu of flowers, please consider making a donation in Andrew’s memory to an organization that benefits veterans.

ATTLEBORO- Andrew A. Figuerado Sr., 87, of Attleboro, passed away peacefully on Wednesday, May 23, 2018, at his home in Attleboro. He was the devoted husband for 60 years to Ida (Brochu) Figuerado of Attleboro. Andrew was born on November,... View Obituary & Service Information

The family of Mr. Andrew A. Figuerado Sr. created this Life Tributes page to make it easy to share your memories.

Send flowers to the Figuerado family.