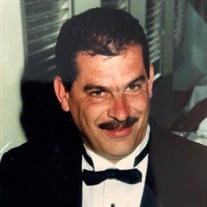 ATTLEBORO- Alfred “Fred” E. Oliver Jr., 63, of Attleboro, passed away on Tuesday, March 12, 2019 at his home in Attleboro. He was the beloved and caring husband for 39 wonderful years to his wife Joanne F. (Rock) Oliver of Attleboro. Born on October 22, 1955 in Attleboro, he was the loving son to the late Alfred E. Oliver Sr. and Isabelle (Pacheco) Oliver. Born and raised in Attleboro, Fred was a graduate of Attleboro High School. He grew up in and was a lifelong resident of the Lonicut neighborhood in Attleboro. Since the age of 18, Fred worked as a toolmaker for K.F. Bassler in Attleboro, which was acquired and later became PEP Brainin. Fred was a member of the Portuguese American Club, where he liked socializing with friends and attending functions. In his spare time, Fred enjoyed tending to his lawn and growing vegetables in his garden for all to eat. People he didn’t even know would stop to comment on how green his grass was or how big his garden was and Fred took great pride in that. He was a New England sports fan as well as a supporter of Attleboro High School basketball. He was also an avid angler and enjoyed fishing in the local area. Besides catching fish, Fred took an interest in raising, breeding, and collecting tropical fish. Above all, Fred was happiest when he was in the presence of and making memories with his treasured family. He was very excited to be a recent grandfather to an eight-month-old baby girl. In addition to the love of his life, Joanne, Fred is survived by his proud sons, Derek Oliver of Attleboro and David Oliver and his wife Erin of Bellingham; his granddaughter, Emma of Bellingham; his siblings, Paula Haag of Attleboro, Pat Haag of Oakland, Maine, Donna St. Lawrence of Warwick, RI, and Rick Oliver of Gainesville, FL; also many cherished nieces, nephews, cousins, extended family members, and friends. Relatives and friends are invited to attend a visitation from 4 – 8 p.m. on Sunday, March 17, 2019, at the Duffy-Poule Funeral Home, 20 Peck Street, Attleboro. A funeral will be conducted on Monday, March 18, 2019 at 10:30 a.m. from the Duffy-Poule Funeral Home, followed by a Mass of Christian Burial at 11:30 a.m. at St. Vincent de Paul Parish, 71 Linden Street, Attleboro. Burial will take place privately. In lieu of flowers, donations in Fred’s name can be made to the Dana-Farber Cancer Institute, Dana-Farber Cancer Institute, P.O. Box 849168, Boston, MA 02284 or via www.dana-farber.org/gift.

The family of Mr. Alfred "Fred" E. Oliver Jr. created this Life Tributes page to make it easy to share your memories.

Send flowers to the Oliver family.