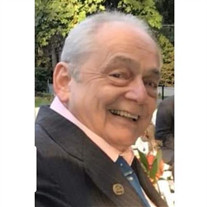 ATTLEBORO—Albert J. Viau, 79, of Read Street, South Attleboro, died on Thursday, September 19, 2019 after a year-long battle with cancer. He was the widow of Margaret A. (Kane) Viau. Born in Central Falls on December 29, 1939, he was the son of the late Theodore Viau and Marie C. (Viau) Barrette both born in Pawtucket, RI. Mr. Viau was employed by Texas Instruments after he graduated from Attleboro High School in 1959. He started as a Wire Drawer and made his way through the ranks to become an Inventory Production Control Supervisor that he retired from in 1998. He took a leave early in his career to enlist in the Coast Guard and proudly served on the USCGC Duane between 1962-1966. He then spent many years helping to coordinate the Duane’s annual reunion. After retiring from TI he spent many years involved in the management of the American Legion, Post 312 in South Attleboro. He also spent time volunteering for the Veterans Administration driving local vets to their medical appointments in Providence and Boston. He enjoyed playing pool, cards and singing karaoke. He is survived by two sons, Kevin Viau of South Attleboro, Sean Viau and his wife Michelle of Attleboro and one daughter, Susan Najac and her husband David of South Attleboro; two sisters, Irene Bellavance of North Attleboro and Barbara Griswold of Seekonk; four grandchildren, Keely Benoit and her husband Joshua, Mitchell Caruso, Zachary Viau, and Caitlyn Viau all residing in Attleboro. He was the brother of the late Claire Viau and Blanche Sulham. Relatives and friends are invited to attend a memorial visitation from 4-8 p.m. on Wednesday, September 25, 2019 in the Duffy-Poule Funeral Home, 20 Peck Street, Attleboro. A funeral will be conducted at 9 a.m. on Thursday, September 26, from the Duffy-Poule Funeral Home, followed by a Mass of Christian Burial at 10 a.m. in St. Theresa’s Church, 18 Baltic St., Attleboro. Burial will follow in St. John’s Cemetery, Attleboro, MA. In lieu of flowers, donations in the memory of Albert may be made to the City of Attleboro, Veterans’ Services Department, 77 Park Street, Attleboro MA 02703. Please make check payable to the “City of Attleboro Veterans’ Services” and indicate in the check memo that the donation is for The Vietnam Wall.

The family of Mr. Albert J. Viau created this Life Tributes page to make it easy to share your memories.

Send flowers to the Viau family.