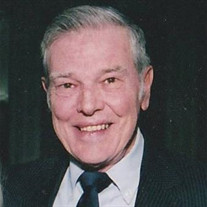 ATTLEBORO - Albert Rheaume Allard Jr., lifelong resident of Attleboro passed peacefully at Sturdy Memorial Hospital on March 5, 2019 with his family by his side at the age of 82. Born in 1936, to Albert R. Allard Sr. and Edna (Boyd), Al, or “Buddy” as he was known by his family and close friends, grew up in Dodgeville, was a graduate of Attleboro High School (Class of 1954), served in the United States Army, earned his degree in Business Administration from Bryant University and proudly raised two children with his wife Rita (Graveline) who preceded him in 1992. He began his career at L.G. Balfour Company as a bench worker and finally as the General Manager of the Jewelry and Awards Division until Balfour ceased manufacturing in the Attleboro area and moved out of Massachusetts. Al went on to form, or was involved in many business ventures with a number of his former Balfour colleagues , before retiring from manufacturing and the industry after dedicating over 50 years to it. Al continued to stay involved in the community and the legacy of Balfour by serving on the Board of Directors for the Goldmark Federal Credit Union. Al is survived by his daughter Kimberly (Allard) Devine and her husband Scott of Gold Canyon Arizona, his son Timothy Allard and his husband William Florentino of Attleboro, his sister Carole (Allard) Pasch and her husband Stephen of Saint Helen, Michigan, Al’s longtime companion of over 25 years Maureen (Bellavance) Lavallee and her children Fran Weldon, Natalie Hiatt, Kate Haselton, Owen Lavallee and Rick Lavallee. Buddy will be forever remembered as a loving husband, cherished brother, supportive father, friend, companion, uncle, grandfather and great grandfather to whomever had the privilege and honor to know and love him. He will be forever missed. Relatives and friends are invited to attend a visitation on, Wednesday, March 13th from 3-7 pm in the Duffy-Poule Funeral Home, 20 Peck Street, Attleboro. A funeral service will be held immediately following the visitation at 7 pm in the funeral home. Burial in St. Stephen’s Cemetery, Attleboro will be held privately. In lieu of flowers, donations can be made to the Albert R. and Rita J. Allard Fund C/O the Sturdy Memorial Foundation, 211 Park Street, PO Box 2963, Attleboro. The fund established by Al many years ago was his way to support Sturdy Memorial Hospital and the critical health services, education and technology it provides to care for the community he loved for future generations while also creating a loving tribute to his beloved wife Rita, who so bravely fought her cancer.

ATTLEBORO - Albert Rheaume Allard Jr., lifelong resident of Attleboro passed peacefully at Sturdy Memorial Hospital on March 5, 2019 with his family by his side at the age of 82. Born in 1936, to Albert R. Allard Sr. and Edna (Boyd), Al, or... View Obituary & Service Information

The family of Mr. Albert Rheaume Allard Jr. created this Life Tributes page to make it easy to share your memories.

Send flowers to the Allard family.